MaSzyna is very realistic train simulator software which is developed from over 10 years by train enthusiasts. Real train behaviour is the most important, so there are places where this simulator is used for professional driver trainings. Another advantage is that this is free of charge and can be downloaded from eu07.pl website (English manual and support forum is also available).
Driver can operate many locomotives known from Polish rail roads. Basically it can be done by using regular computer keyboard but for some users it is not enough. Some of us try to build his own dashboard which make driving much more exciting and realistic. We try to use as much original locomotive parts as we can. Connection those parts to simulator is always a challenge. 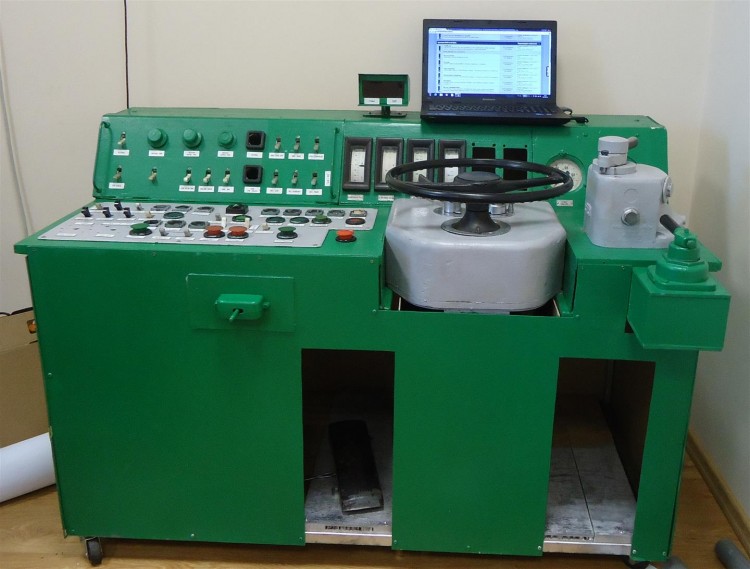 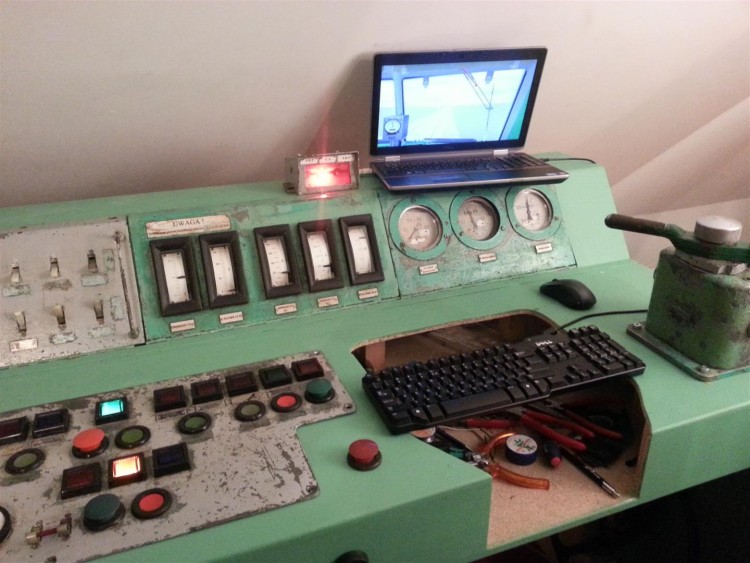 I’m not very skilled in electronics so I looked for easy to use interface which can support all important types of input and output devices. PoKeys55 was implemented in MaSzyna as standard I/O interface and some features are used directly. Other input features must be configured manually as digital inputs, triggered inputs or macros.

MaSzyna use PoKeys55 as one of standard output interface 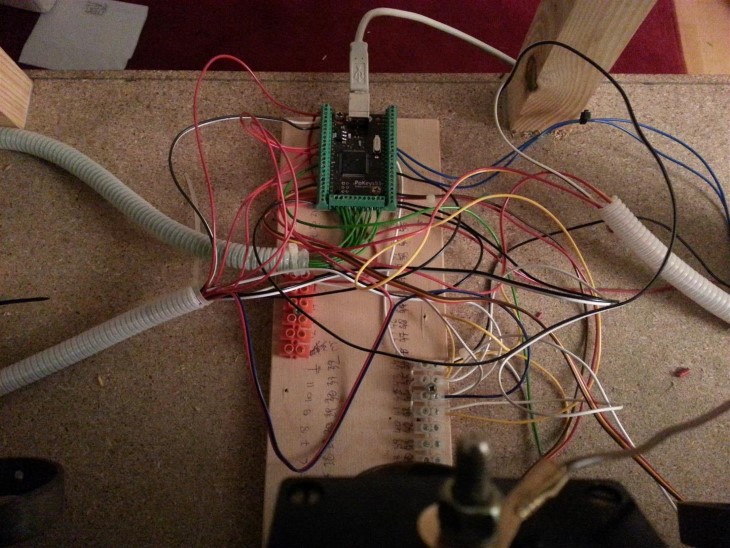 As I mentioned above, real locomotive dashboard contains many different components which should be connected in different way. There are input devices like buttons, switches, brakes, main controller, reverser, field shunt and output devices like control lamps, measurement devices (electrical and air pressure) etc.

Buttons are simply connected as switch between ground and selected PoKeys pins, then configured as Digital Input > Direct Key Mapping to simulate standard keyboard behavior. Similar for stable switches but here I used Triggered Input feature which gives me possibility to indicate both states (on and off) using only 2 wires. 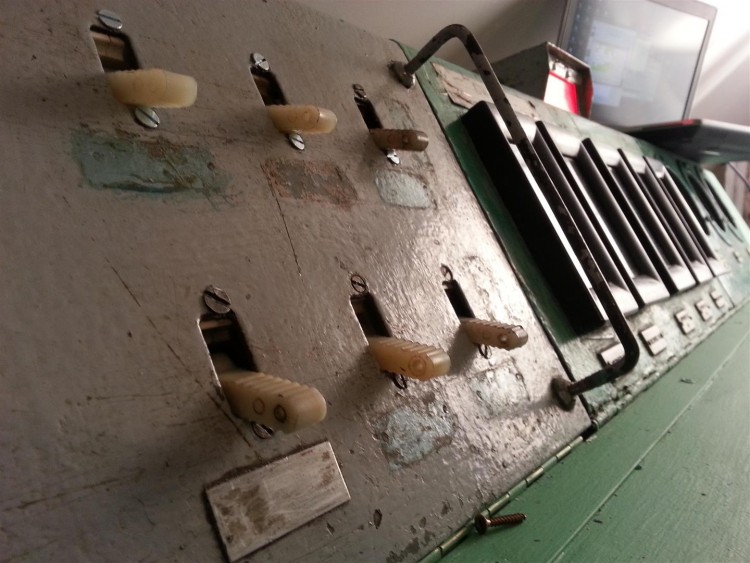 For main controller and field shunt I would like to use encoder features build in PoKeys. Those controllers uses several impulses to increase or descrease locomotive speed. In that case both impulse and direction are important. I used optical mouse sensors and home-made encoder wheel to send data to PoKeys encoder channels A and B. Two encoders are used in that case.

For output devices, native MaSzyna support is required. We have over 10 control lamps and 6 mesurement devices supported today. For every lamp I used Digital Output feature and small PCB (using optocoupler and relay) to drive 12V bulb. 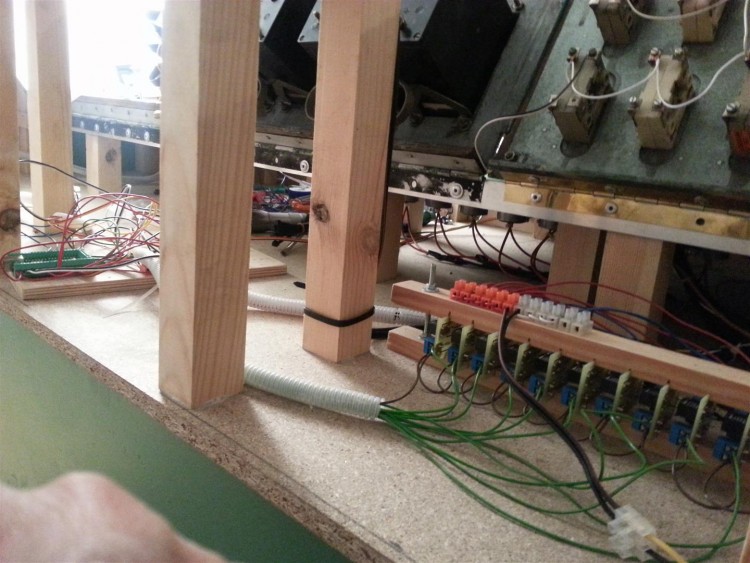 Lamp controllers in the cradle (connected to PoKeys Digital Output) 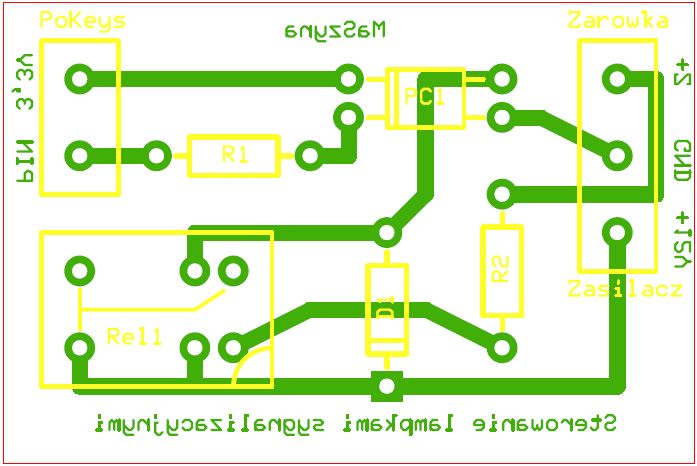 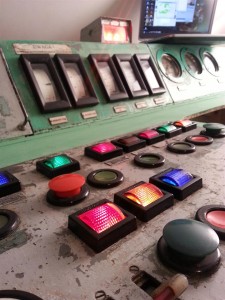 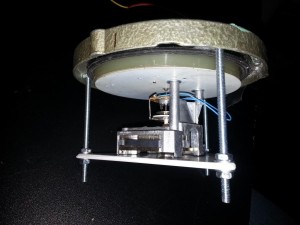 Here I reach PoKeys55 limitation. Our locomotives use up to 10 measurement devices, and now due to PoKeys PWM outputs we can drive only 6 of them. 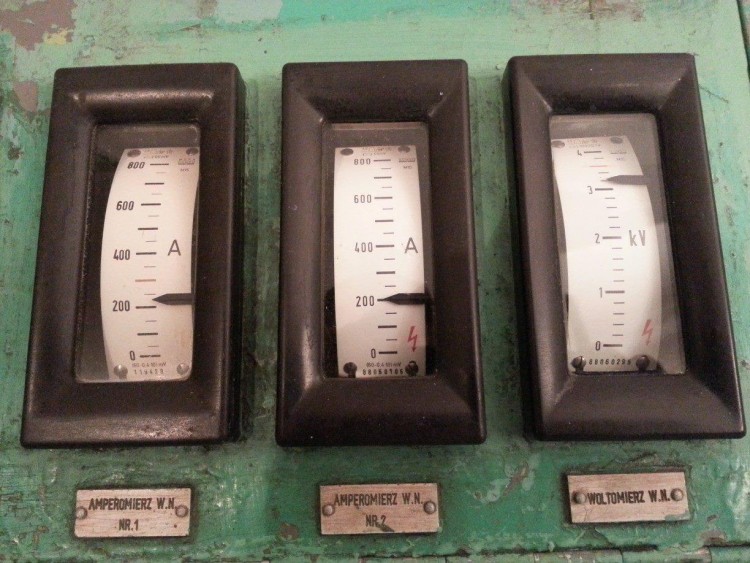 Finally, small PoKeys controller, some PCBs and many wires can revive an old rusty dashboard and gives very exciting moments for young and older boys.

(Above text was prepared in 2013 for mypokeys.com which site is not available now.) 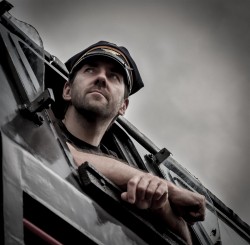